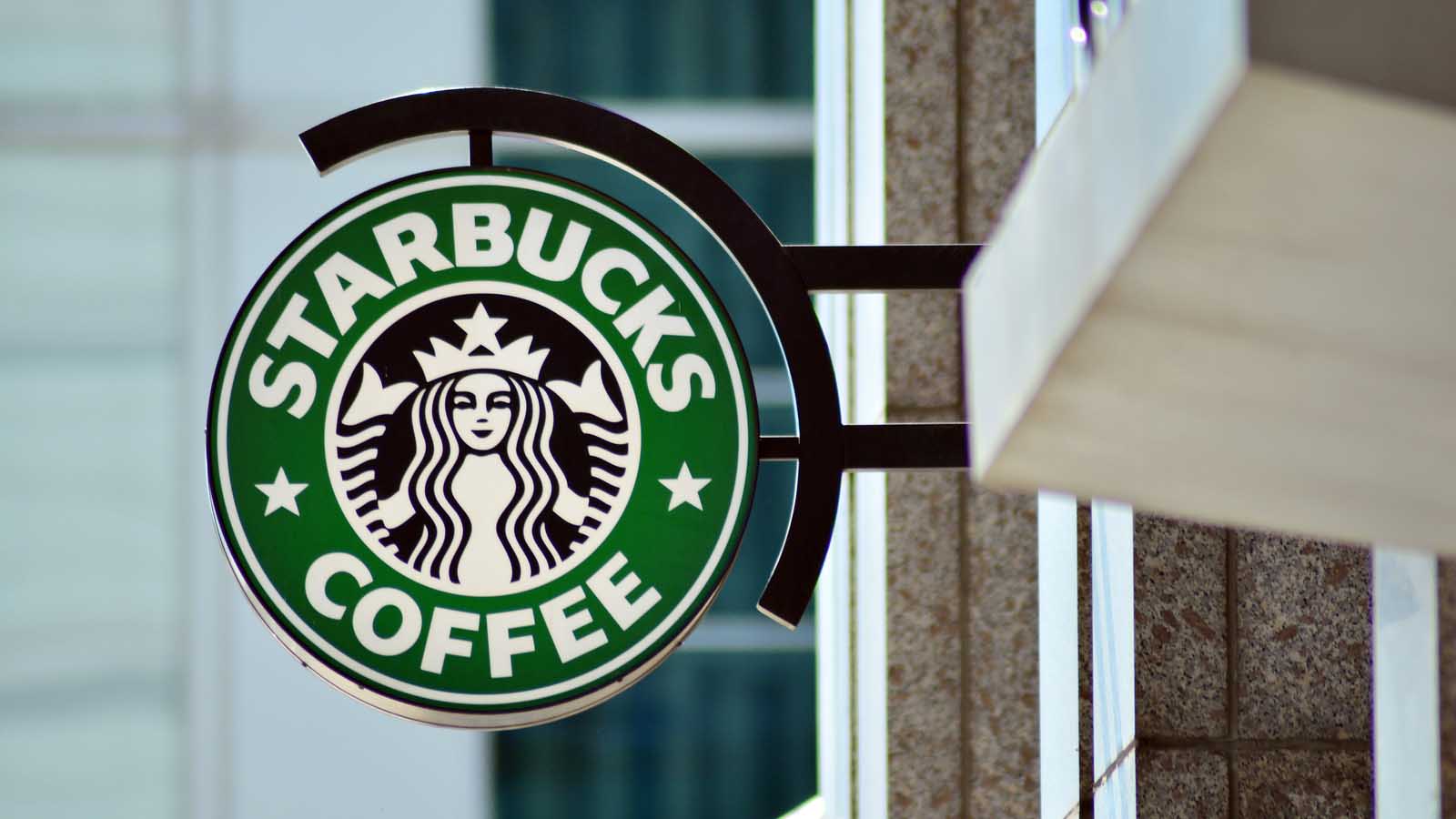 Let’s establish the fact that I am not a hater of Starbucks (NASDAQ:SBUX) stock. In fact, I was a fan when it mattered most. When the going got tough last year, I saw past the pandemic problems. I supported SBUX stock with my article March 17.

That was one day before the bottom near $50 per share. It is now more than double that and therein lies my problem. The business has almost never been worse, yet the SBUX stock has never been higher.

In my article last year I said “Common sense wins in the long run” but I was wrong. All sense went out the window once they surpassed the ideal conditions levels of January 2020.

Therefore, I will slightly modify the same quote but to raise caution. Common sense will return in the long run. Meaning I don’t want to call for an outright short, but I would book profits. Also, waiting for a dip to buy makes a ton of reason.

That was one day before the bottom near $50 per share. It is now more than double that and therein lies my problem. The business has almost never been worse, yet the SBUX stock has never been higher.

Last year when I called to buy the bottom, I never imagined they would eclipse the 2019 all-time high. Getting back to the March 2020 pandemic accident scene is one thing. Soaring past it is completely mindless. This defies logic, but don’t take my word for it.

The Proof Is Not in the Pudding 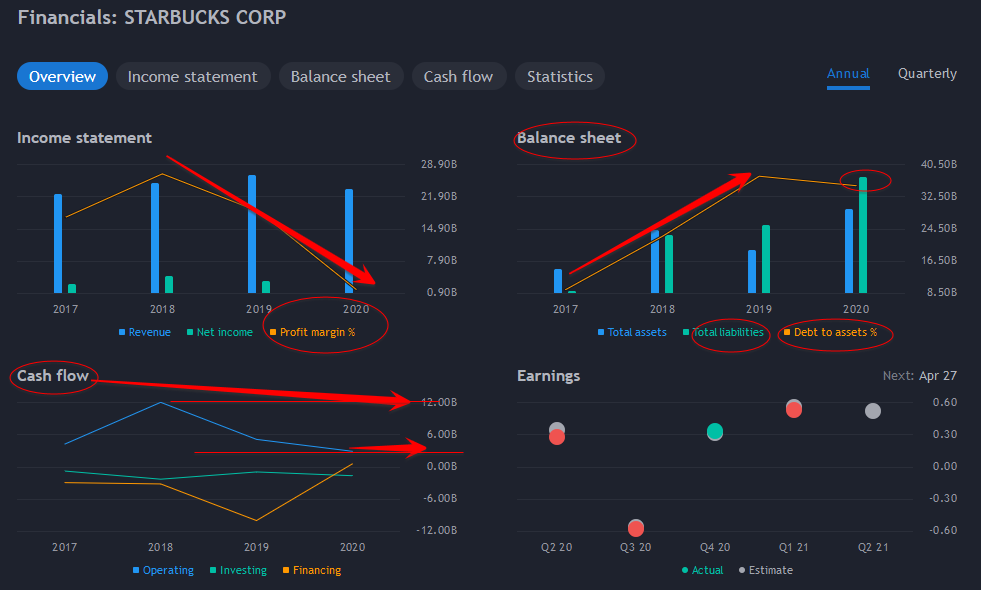 The evidence is in the SBUX fundamental metrics. The balance sheet and the income statement have deteriorated drastically. Profit margins collapsed. Debt-to-assets is rising and it’s generating much less cash from ops. The stock buyers have overdone it. The company went from $3.66 billion in average net income to $665 million current run-rate.

I was a big fan of the fundamentals, but what I am seeing here is absolute lunacy. Two things need to happen. The first would be a sharp turnaround in the performance metrics. Or the second is for the stock price to correct sharply lower. It is highly unlikely that the business is going to magically revert to pre-pandemic operations. This leaves only the stock-dip option. At these levels, smart money should not be buying SBUX stock.

As I stated earlier, I was a fan of the company and I don’t remember ever shorting it. I will wait patiently for a large dip to pounce. I am confident that the pendulum will swing too far the other way as it always does. That’s the time to catch the falling knife. If I am not long the Starbucks stock already I should admit that I missed it.

Buy SBUX Stock Only After a Significant Dip 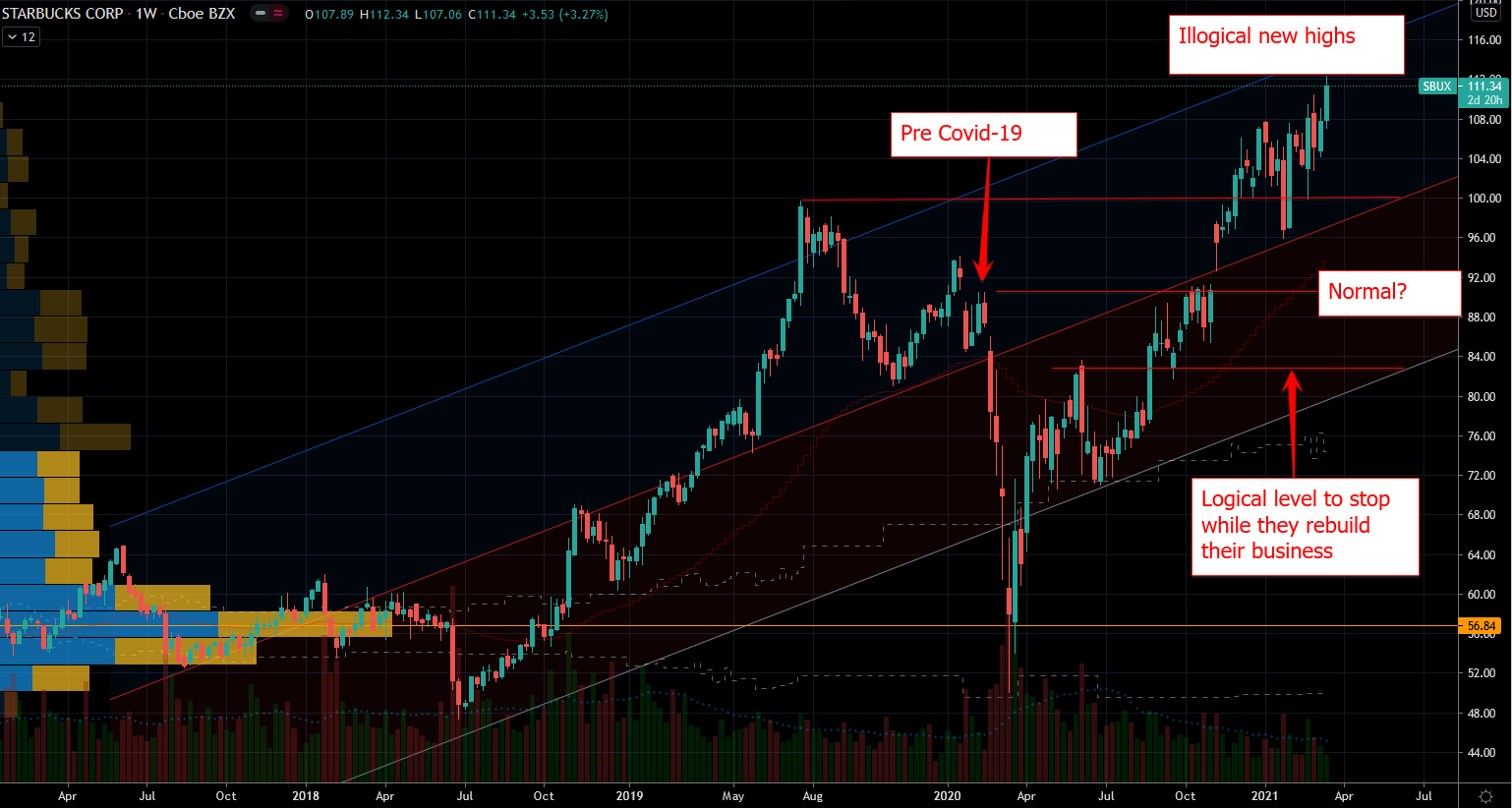 My argument raises the question why not short it? The answer is that I don’t short strength without a reason. The buyers are in complete control, and without a trigger I don’t want to fight them. SBUX is in open air so there is nothing against which to pin short levels. I’d rather buy the dip than wish it harm.

I currently see no weakness in the chart on any time frame yet. Usually we start seeing cracks on 15 minute charts. They then creep up to higher time frames but nothing yet.

Investors usually throw the biggest hissy fits when they suffer disappointment. With a stock price this high, the expectations are too high. First, the price-to-earnings ratio is 195 but that’s not the problem. I can give it a pass on that front while still recovering from the novel coronavirus. But the hopium actually lives in the 6x price-to-sales. That’s 40% more expensive than Amazon (NASDAQ:AMZN) and it double its net income. Amazon revenues grew 40% in a year, so it backs up stock price with results.

At some point the investors will want to see expansion in SBUX metrics. Or else they will hit the sell buttons to bring the stock price back in line on that front.

I summarize today’s point with this: I am confident that investors will have a chance to buy SBUX much cheaper later this year.

On the date of publication, Nicolas Chahine did not have (either directly or indirectly) any positions in the securities mentioned in this article.

Nicolas Chahine is the managing director of SellSpreads.com.